This site doesn't support Internet Explorer. Please use a modern browser like Chrome, Firefox or Edge.

The History of Coins

The History of coins begins somewhere between Ephesus Lydia and the Aegina island when traders were looking for some small common medium of exchange and value to the holder.

We are unsure which started with the production of the first coins but in was nearly at the same time.

Bartering would not always work and a small valuable medium of exchange was necessary.

It could well have been the Asians who produced the first ancient Chinese coins but it was not coinage as we know it today but cast shapes of copper given a particular value and used for trade.

Most all civilizations developed some sort of coinage because if made trading so much easier.Even in places that had little metal other materials were used as an example in Yap where they carefully cut large stone pieces into a coin shape and then put a hole in the middle to put a timber through to carry it.

These would never wear a hole in your pocket.

In recent times another example would be the Seychelles’ islands under the Clooney Ross family. There they used square cut ivory which was stamped with permanent ink to show value.In the history of Coins none were more beautiful than under the hands of the Greek craftsmen. Fortunately they produced coins for about 650 years and many beautiful examples can be found.

The Romans however were more into using the coins as a means of propaganda and the quality of art work diminished considerably along with the purity of the metal. 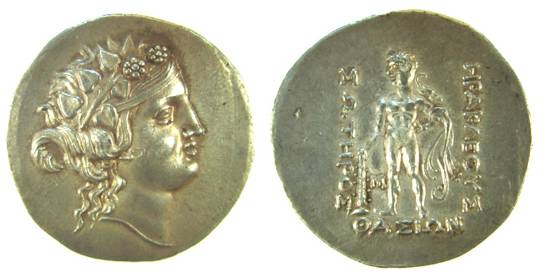 The worst looking coins came to us from the end of the Roman Empire with the start of the Byzantine Empire. Coins were very plain at best.

I say worst because we had so many beautiful coins before this period and the strong religious influence took the beauty from coins.

The materials used during most of the production of coins have almost always been gold, silver and copper or a mixture of these and other materials in which to harden the metal.

The purity of the metal often reflected the economic strength of the issuing sovereign.

The history of coins has also had many pretenders in the form of coins but called tokens. These tokens came in various materials including those used predominantly for coins of the realm meaning copper and bronze.

On Site Links for:

Enjoy this page? Please pay it forward. Here's how...

© Copyright 1968 All Rights Reserved by www.topcoins.com

No Reproduction Permitted Without Permission